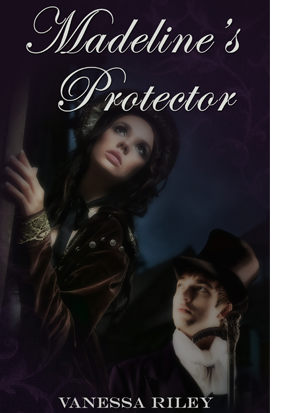 Yesterday, Lady Glaston accused Justain of compromising Madeline and demanded he right the situation. Unwilling to have scandal taint the young woman, he prepares to propose marriage, but Madeline's not ready to be hitched. What's a almost-reformed rake to do?

Aunt brushed Madeline's hair, pulling and pinning until it had enough shine to replace candlelight. She stuffed Madeline into a peach robe. The itchy collar made from two layers of lace kept flipping up on her chin.

A hard knock rippled down the door.

Madeline became queasy. A lump formed in her throat.

Lord Devonshire entered and charged to the foot of the bed. His cinnamon coat draped tan breeches. His elegant face lacked the teasing tones she longed to see.

He bowed, then addressed Aunt Tiffany. "Dr. White assures me that Miss St. James is well enough to answer a question." He fondled his starched cravat as he addressed the women.

"My niece is doing well today." Her tone was civil. Aunt moved from the headboard. Her heavy rose walking dress swished as if a breeze floated through the window. "We'll be outside for a moment."

Mrs. Blakeney groused as Aunt towed her from the room. They left the door wide open.

Lord Devonshire seemed distracted by the show, but like a marionette on strings bent on one knee. "Miss St. James, Providence has brought you into my life." He opened a velvet box exposing a perfect ruby ring. "Will you do me the privilege, the honour, of marrying me?"

No harps. No feeling of sentiment. If he loved her as Aunt said, Madeline saw no evidence of it. "I need no gifts."

"It's a family tradition to bestow this jewel to the future countess of Devon."

Kent had connived and tried to trick her, but this man bore a ring to seek her hand.

She shook her head. "I'm grateful, but-"

Sounds erupted from the hall, a mixture of moans and the garbled cry of "headstrong girl!"

"Miss St. James, may I?" The earl took her hand and slipped the jewel on her finger. The ruby sat within a simplistic weave of gold braid. "Its weight is a measure of the protection I offer."

It was a perfect fit, as if it were made for Madeline.

He knitted his brows together. "You don't like it? I know some like a more ornate setting, but it's been passed down amongst the generations of Delveauxes."

"No, it's beautiful. If I could have any ring, I'd choose this one, but it's our circumstance that's gifting this to me." Madeline tried to give it back, but he closed her hand about it.

Lord Devonshire's forehead became riddled with lines. "Our situation is unique, but our responsibilities must be served." He scanned her face as if words were etched on her cheek. "You think I'm not fit to have your hand?"

The man swallowed; a raspy noise fled his throat. "You won't have me?

Madeline licked her lips. "I don't think we are rightly matched." The ruby felt heavier, perhaps laden with a sense of obligation.

"Maybe, I didn't hear you." Lord Devonshire tugged on his cinnamon-coloured lapel. "You're

She should be indebted to his heart. He saved her life twice. Shouldn't that be enough to say yes to him? Madeline closed her hand tight about the ring. "Is this God's will for our lives?"

The earl feathered his fingers over his full lips. "This is—"

Aunt coughed long and hard. It sounded as if she'd fallen flat in the hall.

"Sir, you should go see if things are well with my aunt." Madeline waved him to the door.

He took her hand and splayed her palm. The ruby sparkled. "I'm not concerned with the antics outside this whitewashed bedchamber, and I lack the wisdom to discern Providence's will. But, Miss St. James, I know that I must do this, must make you my countess."

All of her hopes of finding her own peace, of claiming a cup of independence ended on the rocks of the Severn Gorge.

The bed swayed, and she refocused upon the earl's countenance.

Lord Devonshire sat upon the edge, and imprisoned her hand in a crush of warmth. "I'm rushing you?" He swirled circles upon her lacy sleeve with his thumbs. It reminded her of his manner in the carriage. He kissed her wrist, lingering as if smelling a rose. "No more liniment."

She shook her head and tried to remember how to breathe. Must be the doctor's potions making her dizzy.

"And my family ring looks well upon you." His handsome face bore a fresh shave. Sandalwood anointed his skin. His eyes seemed determined, fixed upon securing an answer. "I'm not an errand boy to be waved off. If you're in love with another, tell me."

"No!" Madeline shrieked. She stifled her arms from trembling. "I'm not in love with anyone."

His eyes regained their glow, twinkling with some newly found humour. "Then why cannot I have all your love? I cannot breathe one other sigh, to move…Nor can I entreat one other tear to fall…Sweetest love, I-"

She placed her fingers on the earl's mouth to silence his mangling of Donne's poetry. "You choose the responsibility of a lame wife?"

He looked to the open window. Perhaps he'd escape through the billowy curtains.

Madeline wanted to, but the stiffness in her leg prevented it.

"But you're not. It takes time to heal, particularly from field surgery." Lord Devonshire adjusted his crisp white cravat as if it choked.

"I've no complaints of your actions. You saved my life."

He reached over and seized the heinous wooden crutch leaning against the pine headboard. "One of Dr. White's contraptions. Have you tested this?"

"I've stood with the evil thing."

"You're being silly." The earl put the implement down. "Time will make you strong again. These inconveniences will go away."

Madeline applied a shaky palm to his chin. "You've done so much to protect me. Too much. Lady Glaston won't tell you because she wants me settled, but I might never walk under my own power. I may be a slave to a staff forever. You don't want that burden."

Lord Devonshire gazed at Madeline as if he memorized her face for a canvas. He pulled near. His warm breath cascaded her neck as his lean nose nuzzled her jaw. "Strawberries. Always smell of the luscious fruit, and my hunger for you will not die." He retook her hand and spread it against his silky waistcoat close to his heart. "I'm well aware of your condition, and I know my responsibilities." He traced the outline of her legs, tucking the linen sheets about her. "I will enjoy carrying you to the ends of the Earth, and if you have to use a staff, there'll be no lovelier, no more graceful countess for Devonshire."

Such tender words. A tear escaped her eye.

The earl leaned in and kissed the droplet away. He lingered softly brushing his lips against the hollow of her cheek. "Marry me, Madeline. I shan't have no as an answer. My lands in Devon and the green pastures of my holdings in Ireland or Spain-"

"Your wealth is immaterial."

"But they will give you the peace you seek. You'll have the time to recover, free from fear. I'll hide you from the nightmares. The ones that plagued you when you were ill."

A chill raced her spine. He could protect her. The man had proven that. "Are you sure I'll make you happy?"

He gathered her in his arms. "Let me tend to you."

The noble beating of his heart sounded in her ear. Could anyone ever defeat these strong arms? Not possible. All she had to do was say yes.

His mouth descended upon her forehead. "Sweet girl, take the humble protection of my name."

Was he her knight, the man meant to treasure her? Madeline sniffed his scent. "Sandalwood."

"I always make sure I'm clean shaven before I seduce a lady in her bedchamber."

"What?" Her pulse raced.

Lord Devonshire chuckled. His deep voice rippled through her. "Trust that I will always provide for you."

Maybe they'd build a lasting future. The smell of his skin banished the last vestiges of fear. "I accept Providence's hand. You do me an honour."

The earl lifted her chin. He leaned down. His mouth floated above hers. "Tell me you'll marry me."

Shouts erupted from the hall.

Aunt Tiffany and Mrs. Blakeney bounced back into the room.

Lord Devonshire released her. He bowed and left in haste.

Aunt Tiffany ambled to her side and inspected the ruby.

"Your mind should be eased." Madeline fell back upon her pillows. "I'd hoped travelling to Cheshire would be an adventure of a lifetime. Now everything is spinning out of control."

"No, everything is being made right, child."